The Irish playwright Hugh Leonard (1926-2009) described writing as “an illness, a virus that no science can isolate and cure”.  This illness afflicted him for his 82 years during which he wrote some 30 full length plays, 10 one act plays, at least six film scripts, three volumes of memoirs, three novels and a satirical newspaper column.  His plays have been performed on five continents.  He won television and theatre awards.

This is the official website for Hugh Leonard.  In format it is part website, part blog, part scrapbook.  The intention is to build up over time a comprehensive and authoritative reference work on his plays, books, television scripts, essays and columns.  Articles on individual plays and other topics are presented as blog posts; reference material is provided through the drop-down menus.  Your comments, contributions and corrections are all welcome. 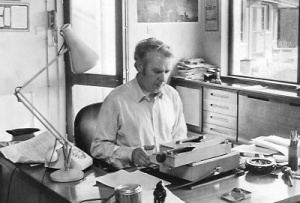 Published by Writing from Dalkey

I'm interested in the mechanics of social enterprise and nonprofit organisations. Personal interests include Irish theatre, PG Wodehouse, sustainable and local development and low impact living. I write about the work of Hugh Leonard, theatre reviews (from Plays International magazine). View all posts by Writing from Dalkey